On September 9th Apple launched a line of new products to look forward to this Spring.

The new iPhone 6s and 6s Plus are now available in Apple stores and phone dealerships nation wide.

These two are almost identical in appearance to last year’s iPhone 6 and 6 Plus but with faster processing, 4G and wifi capabilities and a much improved 12 mega pixel camera capable of 4k video recording and live photos (think Harry Potter moving photographs). In addition to the previous Silver, Space Grey and Gold, the new iPhones will be now also be available in the new Rose Gold.The iPhones will of course be equipped with the new iOS 9, which was released on the the 16th of September for current iPhone and iPad users. The latest selling feature of the iPhone 6s and 6s Plus is the new Multi-touch otherwise known as 3D touch or Force touch, which allows users to gain access to extra shortcut features and settings, much like right-clicking on your computer. 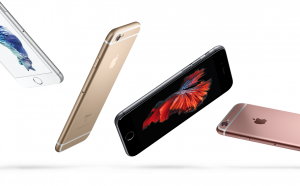 iPhones and iPads are not the only ones with a new upgrade coming up; a new Apple Watch OS 2 is set for release in the coming months as well as OS X El Capitan for Mac on September 30th.

Apple has also released two new iPads, the iPad Mini 4 to replace it’s predecessor and the new iPad Pro.
The iPad Pro is the largest iPad yet, a massive 12.9 inch screen, with Multi-touch and a couple of cool optional accessories; the new keyboard case snaps on much like the magnetic smart covers for previous iPad models but now with a full sized Qwerty keyboard. Probably the most appealing to artists and notetakers alike, is Apple’s new Pencil, specially designed for the iPad Pro. Unlike other styluses on the market, the Pencil is said to be the most natural to write or draw with; offering better precision, responsiveness and is capable of both pressure point line adjustment and shading. The iPad Mini 4 is now available for purchase, whilst iPad Pro is planned for November. 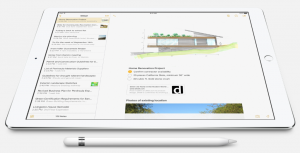 October will also see the new Apple TV which will introduce apps and games to your television. The Apple TV will come with a new glass touch interface Siri Remote.
In addition to being able to quickly find movies and TV shows through voice commands, the new Apple TV is now delving into gaming territory. The Siri remote will include an accelerometer and gyroscope motion controls, enabling a Wii-like interaction for gaming as well as offering Bluetooth support for third party gaming controllers. 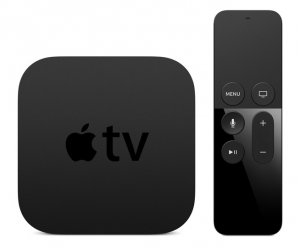