In this particular update, a program called Photos has arrived. This particular program replaces the iPhoto and Aperture programs that may have been on your mac.
The idea behind the Photos application is that Photos for OS X will provide all the features of Photos for iOS, which arrived with iOS 8 last September, to Mac users. The application comes with powerful editing tools that are simple to use (much like the iOS edition), and also has the ability to sync all of your images to iCloud.

For those of you who are unsure of how Photos works, here’s a quick guide.

Photos for OS X looks similar to the iOS edition, but has also inherited some design elements from Yosemite.

As with Photos for iOS, in Photos for Mac you’ll see your photos and video in the Years, Collections and Moments views.

If you click on the Years view you will see tiny images of all the photos you took that year. Tap on a thumbnail to zoom in on that image.
The next level down is the Moments view. This shows you photo from a specific event, such as university graduation or birthday party.

You can also locate images taken at a particular location by clicking on the place name that appears in the top-left of the window, this will take you to a map with thumbnails of the images you have taken at that location over the years

Other Mac viewing options include Photos, Shared, Albums, and Projects.

Photos – Every photo you have in your library
Shared – Any photo streams you are sharing.
Albums – albums you have created and some that are preconfigured
Projects – are essentially slideshows, books, cards and calendars. Slideshows can be configured from a drop-down window and also gain a few new themes. You can still export slideshows as movies.

The software offers a number of options for viewing, managing and sharing your photos. These include:

– Double-click on the thumbnail of an image to view it full-sized.

– Mark an image as a favourite by clicking the favourite button in the tool bar.

– Click the Plus button to add an image to an album, smart album, or project.

– Press Command-I to see the Info window. You will be able to see information about the image including: (some) EXIF data, the location (if it was geotagged), keywords, and face ID. 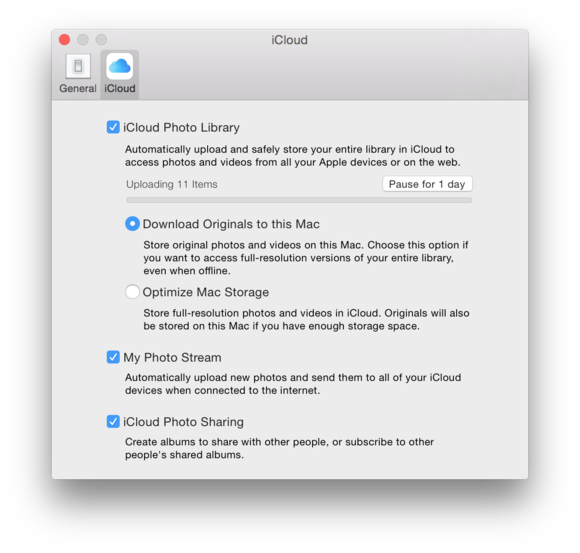 The key advantage of Photos will be its close integration with iCloud, and in particular Apple’s new iCloud Photo Library service.
iCloud Photo Library will store all the photos and movies taken on all your iOS devices, and any images you import to your Mac, on Apple’s iCloud servers. You will then be able to view your iCloud Photo Library on all your devices.
You can also choose to store images both in the cloud and on your Mac – just enable the Download Original To This Mac option, within Photos’ iCloud preference.
The benefit of hosting your images in the cloud is that any change to an image made on any device will appear on all your devices.
For those of you who would rather use iPhoto, you can. Read our Tip of the Month in order to find out how.