Apple have released updates to their range of iPads, Mac Minis, and added a new top of the line iMac 27″ to the fleet.

iPad Air 2;
Apple’s flagship tablet is now thinner, sporting a faster CPU, graphical performance and WiFi all while maintaining the 10 hours of battery life of the previous model. The camera has been updated considerably and the display has a new anti-refelective coating for reduced glare. Finally, the new version has Touch ID, Apple’s fingerprint sensor found on the iPhone 5s and above. 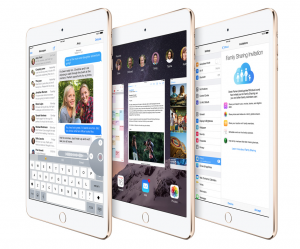 iPad Mini 3;
Apple’s mini tablet received a much more modest update with quite simply the addition of the Touch ID.
It pays to note that the iPad Mini 2 with Retina and even the iPad Mini (first version) are still available, and now, at lower pricing than before.

Both new versions of the iPad are available in the gold colour like the iPhone.

The pick of the bunch has to be the 2.6Ghz version which benefits from a better CPU, likewise a much stronger graphics option and additional storage for $869 inc GST.

Another note, you can no longer upgrade the RAM in Mac Mini’s anymore.
Like the 21.5″ iMac and Macbook Pro Retina and Air machines, the RAM is soldered, inhibiting a later upgrade.
Be sure to think about the intended life of the machine and spec the RAM suitably.
If you feel unsure, feel free to get in touch – we’re more than happy to advise and supply a suitable machine.

Apple have release a 27″ iMac with a Retina 5K display – an IPS technology display with 5120-by-2880 resolution. Other changes include Thunderbolt 2 ports, an updated AMD Radeon R9 graphics options, and a 3.5Ghz quad-core i5 processor with the option for a 4.0Ghz i7.

This beast of a machine is starting from a very reasonable $2999 inc GST and is available now.

For those who are excited and ready to install the new operating system, a word of caution.
Install carefully.
Before you proceed, make sure you have a recent full backup of your machine. Not only is it handy to have your files, but it’s a load off your mind if the install goes wrong.
Also during the install process, make sure you read the options carefully.
During the install, there is the option to enable Apple’s ‘File Vault’. This locks your files away and makes it extremely difficult for people to access them if your install does happen to go awry.
Our suggestion is to leave ‘File Vault’ alone during the installation of Yosemite. If for some reason you require it enabled, do so after the installation is complete.

The below image is what File Vault looks like.

iOS 8.1 is available
iOS8.1 tidies up a lot of the features that Yosemite boasts and of course, is the first full point release of iOS 8 since it’s release only a short while ago.